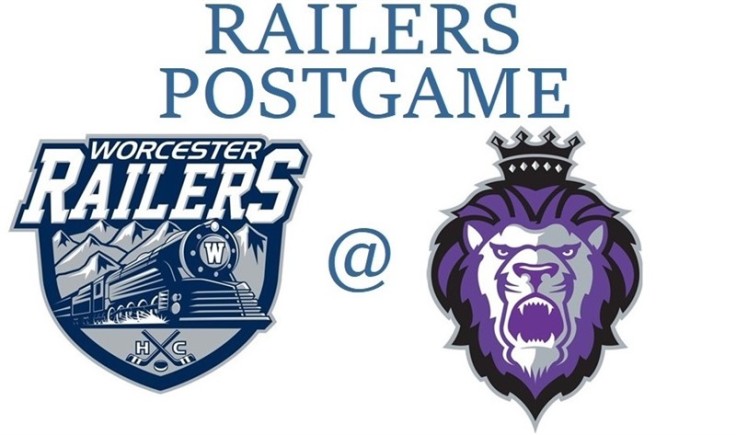 The Worcester Railers kicked off their 2018-2019 regular season Saturday night at the Santander Arena in Reading, Pennsylvania as they took on the Royals in the first of two meetings between the clubs this weekend.

It was Reading that got on the board first when former Railers forward Frankie DiChiara blasted a one-timer past Worcester goaltender Mitch Gillam for a power play goal. Steven Swavely fed the puck from the left half-wall across the open ice to DiChiara at the top of the right circle. Alex Krushelnyski had the second assist at 8:56 of the opening period.

The Railers had lots of chances in the opening stanza, but Reading netminder Branden Komm made several great saves to keep Worcester off the board. Komm also got some help from the posts as Ryan MacKinnon, Barry Almeida, and David Quenneville all found the iron behind Komm.

It didn’t take long in the second period for Worcester to get back to even when at 1:04 Almeida fired a bad angle shot that went high over Komm and in for the unassisted tally. The goal game just a few seconds after the Royals hit the crossbar behind Gillam.

The score would remain deadlocked through the remainder of the second period and on through the third, and the two clubs went to overtime. Nick Sorkin had a great chance after Reading had possession in the Worcester end for a while, but his three zone breakaway was stopped by Komm. Sorkin was able to gather the loose puck behind the goal line to the left of Komm and throw a pass to Josh Holmstrom all alone in front. Holmstrom buried it at 2:39 of OT for the 2-1 Railers victory.

There was some pushing and shoving after the final horn, which will make Sunday afternoon’s 5pm rematch all the more interesting.

Despite the season being just a couple days old Worcester has already had a few transactions since their ECHL Season Opening rosters were announced. Forward Trent Durocher was released on Thursday, and EBUG Ryan Hubbard was added and released on Wednesday. On Friday before the Railers left for Reading Jeff Kubiak and Yanick Turcotte were loaned to the team.

Turcotte became the first Railers player to wear three different numbers in games. Turcotte wore #20 last season, and has switched to #51 for this campaign. He wore #42 for half a period on 11/25/18 against the Wheeling Nailers when his #20 was being repaired.

This seems like a good place to mention that with the new ECHL CBA starting this season the injured reserve list drops from 21 days to 14 days. I’m hearing word that the change was made so players with concussions can be added more freely and not have to wait the extra week if they’re ready early.

It unfair to compare the upcoming second season of the Railers to the Worcester IceCats second campaign because the IceCats played the first season as an AHL independent and the second as the St Louis Blues affiliate, so the 29 point improvement is an unrealistic expectation for the Railers. But the 18 point drop from season one and two the WorSharks had is a bar that should be easily climbed by the Railers.

And after I just say it’s unfair to compare, I’ll mention in the first game of their second seasons both the IceCats and WorSharks won, with the IceCats beating Providence 5-2 and the WorSharks upending the Falcons in Springfield 4-2.

Minor league teams always had a variety of odd promotions, but unfortunately for Railers broadcasters Eric Lindquist and Tom Matthews as the Royals attempted to set a world record for most people in one place ringing cowbells. The cowbells sounded terrible over he radio, I can only imagine how bad it was being at the game.

Last season the Railers had all their road games televised at the Railers Tavern, located just behind the DCU Center on Commercial Street. There’s been a change for this season, with only the road games played Monday thru Thursday being broadcast there. Now the weekend road games, meaning Friday, saturday, and Sunday, will be broadcast at Nonnas at Worcester Ice on Harding Street.

The 210Sports Player of the Game was Barry Almeida

The lines switched a bunch as they game went on, but that combination was what I jotted down so that’s what I’m going with for now.