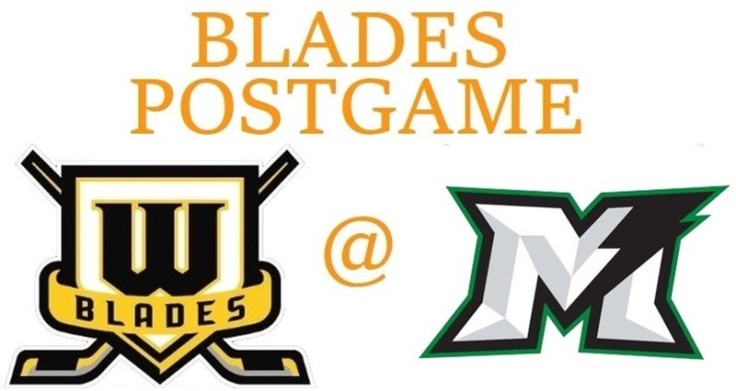 The Worcester Blades and Markham Thunder met for the second of two games this weekend Sunday afternoon at the Thornhill Community Centre in Markham, Ontario.

Like Saturday night the Thunder enjoyed a huge territorial advantage in the first period outshooting the Blades 26-3, but Worcester goaltender Jessica Convery was up to the challenge, only allowing a power play goal from Jess Jones, who banged home a loose puck at 11:17 of the first for a power play goal. Laura Stacey and Nicole Kosta had the assists on the goal.

In the second period the Thunder grabbed two more goals, the first at 10:21 when Daniella Matteucci connected, assisted by Stacey and Jenna McParland. Jamie Lee Rattray made it 3-0 at 12:12 with a power play goal, with Victoria Bach and Jocelyne Larocque getting the helpers.

The Blades had gone two preseason games and their regular season opener without putting the puck in the net, but Casey Stathopoulos put an end to that long streak with a goal at 14:33 of the second period. Megan Myers and Kristina Brown both had assists on the play.

In the third Worcester had their chances to make it a one goal game, but Markham netminder Liz Knox held the Blades at bay the rest of the way. A shorthanded goal at 17:32 by Bach made it 4-1 Markham, and put to rest any chances of a Worcester comeback.

GAME NOTES
Scratches for the Blades were Carrie Atkinson, Rebecca Fleming, Mariah Fujimagari, and Alexis Miller. The Blades went with 21 players, one under the game roster maximum.

The goal by Casey Stathopoulos was her first Canadian Women’s Hockey League goal in 29 games played. The Waltham, MA native had three assists in 27 games last season. She was a good scorer in college, putting up 42 goals and 98 points in four years with Sacred Heart University.

Special teams was one of the big stories this weekend, with the Blades going 0-11 with the skater advantage, and perhaps worse, allowing three shorthanded goals against. Their penalty kill wasn’t much better, killing only five of the nine opportunities against.

It’s easy to list all the things that annoy me in sports, and the CWHL not tracking individual shots for players really annoys me. Folks that know me know I have a thing for statistics, and shots on goal is one of the most basic stats there is in hockey. I know that updating them in real time is hard, but getting it done between periods isn’t a difficult task.

The 210Sports Player of the game was Casey Stathopoulos.