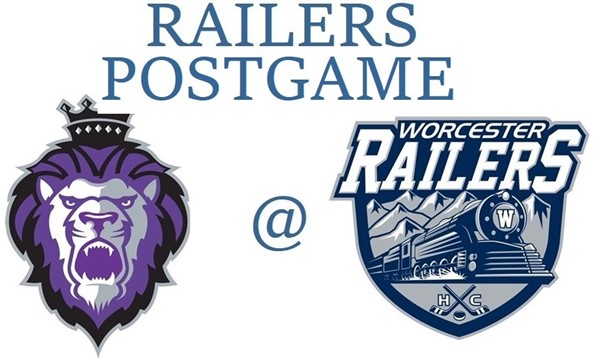 The Worcester Railers opened a four game in five day stretch Wednesday morning at the DCU Center against the Reading Royals in their second annual School Day Game, and in front of 6,043 fans finally found a touch of offense in a 3-2 shootout win.

The day started off like so many of the previous Railers games have, with the opponent taking control early and Worcester playing on their heels. Just when it looked like Worcester was finally going to get something going in the game a turnover in their own end and a lackluster effort by the defense resulted in the puck ending up in their own net.

Railers starting goaltender Evan Buitenhuis had no chance when Worcester turned the puck over from behind their own goal line and it ended up on the stick of Steven Swavely about 25 feet out in front. His wrister at 13:33 of the first gave the Royals a 1-0 lead.

It was all Reading for the rest of the opening period, but Buitenhuis stood on his head and kept his team within one.

Worcester came out in the second period like a whole new team, and during an early penalty kill showed what kind of squad they would have if they can get everything together. Royals goaltender Angus Redmond made more than his share of great saves and it was beginning to looks like the Railers offense was once again going to be stonewalled, but the lucky bounce they’ve been looking for arrived while they were on the power play.

With the man advantage Worcester was doing a lot of perimeter passing looking for an opening, and when Mike Cornell saw he had an open shooting lane he blasted a shot from just inside the blueline. The high shot was tipped by Tyler Barnes in front and past Redmond at 11:36. Tyler Mueller had the secondary assist on the play.

Reading head coach Kirk MacDonald immediately demanded that referee Matt Menniti look at the goal via replay, signaling he though Barnes’ tip was from above the crossbar. Menniti just pointed to center ice and play resumed. It appeared that perhaps the Railers should be happy it wasn’t reviewed.

In the third period, a stanza where the Railers have had some issues keeping the quality of their play high, Worcester continued to get quality opportunities. Their best of the period happened so fast that it stunned most of the crowd.

The Royals had control of the puck in their own end and the Railers were changing ahead of what looked to be a Reading break out of the zone. Suddenly the Royals defense coughed up the puck in the slot and Ivan Kosorenkov pounced on it, firing a laser into the top corner to the stick side of Redmond for the 2-1 Worcester lead at 15:51.

Nothing has come easy for the Railers this season, and Wednesday would be no exception as with just 54 seconds remaining in regulation Swavely tipped a Steve Johnson shot into traffic past Buitenhuis. It was only the second time in franchise history, and the first time at home, that Worcester allowed an extra attacker goal against.

Through overtime the teams went, with both goalies making some nice saves. It was then on to the shootout, where Kosorenkov was the only one of the six shooters to score as the Railers broke their franchise record seven game winless streak.

Worcester is back at it Thursday night, this time with an 8pm start time.

It was a busy week for transactions for Worcester. In addition to signing Millen to a Standard Player’s Contract the Railers released forwards Tommy Tsicos and Bryan Arneson, and signed forward Malcolm Gould. Forwards Matt Gaudreau and Ryan Hitchcock were assigned to the team by Bridgeport. And finally, Ivan Kosorenkov was signed to an AHL contract by the San Jose Barracuda, and because the Railers own his ECHL rights he was assigned back to Worcester.

With Kosorenkov signing with the San Jose organization all three Worcester pro teams will have players assigned from that organization play for them. The WorSharks were the San Jose’s Sharks direct AHL affiliate, and the Sharks assigned Doug Friedman to the IceCats on October 3, 2000. Friedman went 9-10-19 in 41 games with Worcester.

The early start caused some substitutions to be made off the ice. With normal arena host Adam Webster not available Tom “Tuesday” Matthews took his place. That left the chair next to play by play man Eric Lindquist that Mathews usually occupies empty, so Yanick Turcotte provided color commentary for the game.