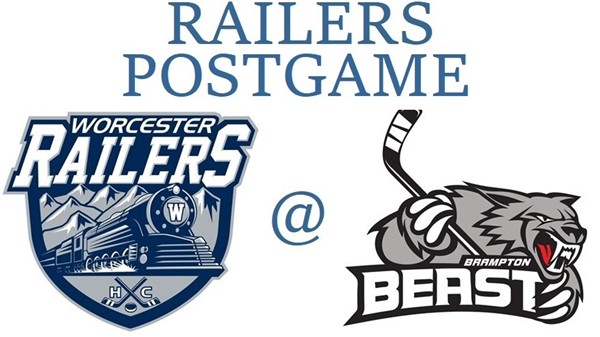 The Worcester Railers and Brampton Beast met for the second time in three days Tuesday morning during the Beasts’ school day game at the CAA Centre in Brampton, Ontario with the Railers looking to get out of their offensive slump and to break their three game losing streak.

Things didn’t start off well for Worcester when just 4:59 into the opening period Ryan Scarfo beat Railers goaltender Mitch Gillam high to the glove side and just under the crossbar for the 1-0 Brampton lead. Aaron Luchuk and Artur Tianulin had the assist on the play.

Brampton had a golden chance to take a two goal lead when referee Alexander Ross awarded Erik Bradford a penalty shot when he was taken down on a partial breakaway. Gillam came up big with the save to keep it a one goal game. It was the first time in two penalty shot attempts against the Railers in their franchise history where they made the save.

Matty Gaudreau got Worcester back to even at 3:50 of the second period when he fired a laser from in tight on goal and past Beast netminder Marcus Hogberg. The box score lists Nick Sorkin as having the only assist on the goal, but the pass from behind the goal line right to the tape of Gaudreau’s stick was thrown by Nick Bligh.

Through the rest of regulation the teams remained tied, and on to the five minute sudden death overtime the squads went. The game winner came for the Railers after Dylan Willick broke into the Brampton zone and fired a shot on Hogberg that rang off the far post. With the linesman ahead of the play waving off the shot Willick continued to crash the net and knocked the rebound over the goal line at 3:39 of OT for the win. David Quenneville had the only assist on the play.

The Railers headed on a nine-plus hour bus ride back to the city after the game, and will next take on the Maine Mariners Friday night in Portland. They return to the DCU Center Sunday for a rematch against the Mariners.

GAME NOTES
Scratches for the Railers were Tommy Panico, Malcolm Gould (14-day IR/upper), Tommy Kelley (14-day IR/upper), and Alex Vanier. Evan Buitenhuis was the back-up goaltender. Yanick Turcotte was activated from injured reserve on Monday, and saw his first action since injuring a knee against Maine on October 20th. It was originally thought Turcotte was going to miss just a couple weeks, but for undisclosed reasons it took over five for him to get back into a game.

As Turcotte finally finds himself off the IR list it’s possible Worcester could be adding another player to it. Defenseman Kyle McKenzie was injured in the second period and headed off to the dressing room with trainer Rob Tagle. McKenzie did not return to the game.

For the national anthems in Brampton prior to the school day game the Beast went with the standard organ music versions. The school kids politely applauded the American anthem, but as soon as the Canadian anthem started the school kids began loudly signing. Soon they sang unaccompanied as the organ music was silenced. It was an awesome moment.

One of the Railers issues with putting the puck into the net is the lack of scoring from defenseman. Until David Quenneville’s assist on Dylan Willick’s overtime game winner no Railers blueliner not named Mike Cornell or Tyler Mueller had had a point since Tommy Panico was credited with an assist on November 7th in St. John’s against Newfoundland. Defensemen Alex Vanier, Ryan MacKinnon, Kyle McKenzie, and Connor Doherty are all in danger of not registering a point in the month of November.

Good friend to 210Sports Rich Lundin, who moonlights as the Worcester Railers Booster Club, notes that this past weekend was the sixth anniversary of one of the wildest, fight filled games in Worcester hockey history. There were eight fights in the contest, and included Pirates enforcer Joel Rechlicz earning 18 penalty minutes during one stoppage of play in the third period without getting into a fight. Twitter was abuzz during the game, and the hashtag this writer used during the time (#WorSharks) was used so often that night that the Sharks began using it themselves for the rest of their time in the city.

The 210Sports Player of the Game was Matty Gaudreau.