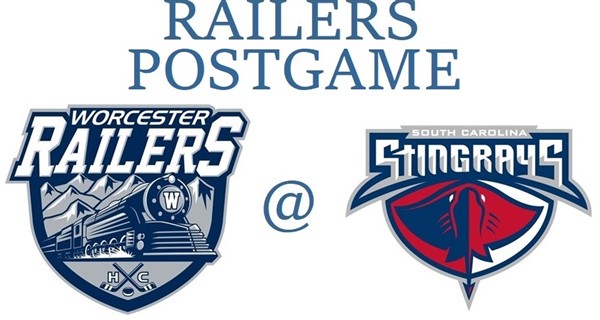 The Worcester Railers headed to North Charleston, South Carolina this week for a Friday night match-up against the South Carolina Stingrays in the first of three contests this weekend in The Palmetto State hoping to start the new year off on the right foot and to finally get the offense going in the right direction

It was the same old song and dance for the offensively challenged Railers, who fired 50 shots on Stingrays netminder Gordon Defiel and saw the red light go on behind him just once in a 4-1 loss to South Carolina. Worcester, who have consistently had one of the ECHL’s worst power plays during their season and a half tenure in the league, went a pitiful oh-for-seven to drop to 11.2% with the man advantage this season. In North American pro hockey only the Evansville Thunderbolts of the Southern Professional Hockey league have a lower power play percentage at 10.2%.

The Railers have spent a lot of time playing from behind lately, and that was the case again Friday night when Grant Besse was all alone behind Worcester goaltender Mitch Gillam and lit the lamp after knocking Jonathan Charbonneau’s pass into the net at 8:08 of the opening period.

Worcester would get the equalizer after they squandered 34 seconds of five-on-three power play time and additional 29 seconds of five-on-four. As play continued with the Railers power play line still on the ice and the Stingrays having a mishmash of players defending Mike Cornell ripped a shot from just above the left wing face-off dot and past Defiel at 8:51 of the middle period. Tyler Barnes and Josh Holmstrom had the assists on the play.

But that would be all the highlights for Worcester as South Carolina retook the lead with 90 seconds left in the stanza on a goal by Andrew Cherniwchan.

A 12-0 shots advantage by the Railers to start the third produced no goals, and it was former Worcester defenseman Vinny Muto that got the backbreaking goal at 16:50 to put the game out of reach. Kevin McKernan added an empty net goal at 17:54 for the 4-1 final.

Saturday afternoon the Railers will bus about three hours northwest to Greenville for the first of two against the Swamp Rabbits.

GAME NOTES
Scratches for the Railers were Alex Adams, Bo Brauer, Malcolm Gould (14-day IR/lower), Kyle McKenzie (14-day IR/upper), and David Quenneville (day to day/upper). Evan Buitenhuis was the back-up goaltender. While there hasn’t been much news on the injury front for Worcester word from Bridgeport is Jeff Kubiak is “week to week” with the ubiquitous “upper body injury”. Matty Gaudreau and Ryan Hitchcock are both still on recall to the Sound Tigers.

There were a few Worcester transactions over the past week, with Head Coach and General Manager Jamie Russell shipping forward Austin Block off to the Manchester Monarchs for future considerations. In his 25 games with the Railers Block failed to light the lamp, which places him seventh all-time in Worcester pro hockey history on the list of skaters to never score a goal. The six in front of him are all defenseman. Worcester also received forward Bo Brauer from Atlanta to complete an earlier trade for Nick Bligh.

Ryan MacKinnon’s five game points streak came to a halt Friday night. As if anyone needs more proof that the Railers offense is terrible that five game streak is the longest this season so far for a Worcester player, and ties for the second longest in franchise history. Barry Almeida and Chris Langkow each had five game points streaks twice last season, with Patrick McNally, TJ Syner, Jeff Kubiak, Nick Saracino, and Ashton Rome all doing it once. The longest points streak in franchise history is just six games, which MacKinnon set last season. He didn’t have a point in his pro debut on February 27th, and then ran off a goal and seven assist over the next six.

This is the first meeting between the clubs this season, so looking at the Stingrays roster there’s several Massachusetts connections, starting with former Railers defenseman Vinny Muto, who started Friday night’s game 1-3-4 in 18 games with South Carolina. Goaltender Parker Milner played four season with Boston College, winning the NCAA Championship in 2009-10 and 2011-12. He was the 2012 Tournament MVP. Defenseman Mike Chen played three season at Division 3 Salem State, and John MacLeod and Wakefield, Mass Nick Roberto native both played four seasons at Boston University. Massachusetts natives Cameron Askew (Boston), Shane Eiserman (Newburyport), Tim Harrison (Duxbury), and Kevin McKernan (Grafton) also play for the Stingrays. For the Railers only one player played for South Carolina, newcomer Bo Brauer. He played five games earlier this season with them but didn’t hit the scoresheet on any of them.

With it being the first game of a new week it’s time to take a look at who the Worcester Railers Fans Facebook group voted as their “Railers Player of the Week” winner. It was slim pickings for candidates as Worcester went 0-1-1 last weekend, but Mitch Gillam was the runaway winner in what was likely more of a popularity contest than anything. Woody Hudson and Matty Gaudreau were the other two nominees.

In case people hadn’t heard here on 210Sports we’ve added a “Worcester Hockey Hall of Fame” link on the main page. For full information as to why you can check out Wednesday’s posting on the subject.

The 210Sports Player of the Game is Mitch Gillam.