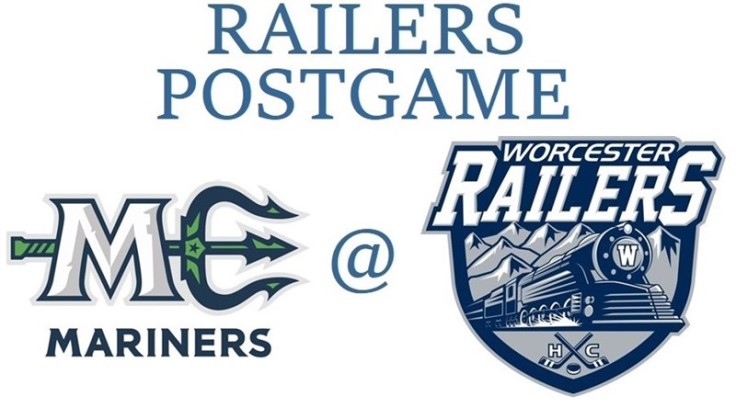 The Worcester Railers took on the Maine Mariners at the DCU Center in what the Railers call “Big Game Saturday” with both teams fighting for position in the ECHL’s North Division and the Worcester faithful knowing a win would at least temporarily earn them the fourth and final spot in the playoff chase.

It was Maine who would strike first while the Railers defense was out of position. Brycen Martin began the play with a hard cross-ice pass that missed everyone. The puck bounded off the left side boards right to Michael McNicholas, who fired it hard on net. Worcester goaltender Mitch Gillam made the save, but former Railers forward Dwyer Tschantz was all alone in front without a white jersey to be seen, and he banged home the rebound at 3:44 of the opening period.

The Railers would tie the game soon after on a textbook odd man rush into the Mariners zone. Defenseman David Quenneville broke into the Maine zone down the middle and threw a pass over to Ryan Hitchcock rushing down the left side. Hitchcock held the puck just until an open passing lane to Tyler Barnes was there, and sent the puck to the slot where Barnes collected it and fired it past Mariners netminder Chris Nell at 5:25.

Barnes would grab his second of the game at 2:16 of the middle stanza, this time with the assists reversed. It was Hitchcock earning the secondary helper with a pass from behind the Maine goal line to Quenneville at the right point. Quenneville teed it up and blasted a shot on net that hit Barnes on the way by and deflected past Nell for the 2-1 Worcester lead.

While Railers fans were still celebrating the Barnes tally the Mariners tied it up just ten seconds later. Defenseman Derek Pratt sent the puck into the neutral zone with a pass off the right side boards to Branden Troock standing in front of the Maine bench. Troock tipped the puck over to Dillan Fox, who raced into the Worcester zone and beat Gillam stick side at 2:26 to make it 2-2.

Worcester would then answer back at 3:59 on another highlight-style goal by Hitchcock. With Barry Almeida and Barnes fighting for the puck in the left wing corner it squirted out of the pile of players along the board to Hitchcock on the right side. As no Maine defender came over to mark him Hitchcock grabbed the loose puck and headed to the Mariners net, firing a tough angle shot over the shoulder of Nell and just inside the near corner to light the lamp for a power play goal.

Once again Maine would answer back, this time on a three on one odd-man rush when Taylor Cammarata sent the puck over to McNicholas, who got just enough of it to deflect it over the goal line to tie it 3-3 at 9:36. Morgan Adams-Moisan had the secondary assist on the goal.

Less than a minute later the Railers would retake the lead for the third time in the game on another odd man rush. Defenseman Robert Powers started the play by throwing the puck forward to the Mariners zone where it was gathered by Matt Schmalz. With Tommy Kelley racing to the net to provide a screen Schmalz threw a pass over to the left side circle. In full stride Dylan Willick one-timed the puck on net and Nell had no chance at 10:20.

Even with the third period lead Worcester didn’t take their foot off the throttle, but it wasn’t until late in the period with Maine skating with an extra attacker that Railers fans could start to breathe easier when Barnes flipped the puck high out of the Worcester zone. Almeida chased it down and hit the empty net from a wide angle at 19:28 to give the Railers the 5-3 win and, at least for the night, a the final playoff spot in the division.

On Sunday Worcester takes on Manchester, who was idle Saturday night, at the DCU Center with a 3pm puck drop.

With the two points on the night giving him 108 for his Railers career Barry Almeida is now tied for 20th place all-time with the IceCats Johnny Pohl and the WorSharks Brandon Mashinter. Almeida is also closing in on top-20s for goals and assists, and once he hits those milestones we’ll mention it. Another Railers player, Yanick Turcotte, is also on the verge of cracking a top-20 all-time Worcester list. His 319 career penalty minutes is a bit shy of making the list.

On this day, March 17th, in Worcester hockey history…in 1996 J.J. Daigneault had a goal and two assist and Paul Broten had a goal and an assist, but it wasn’t enough as the IceCats dropped a 4-3 contest in overtime to the Rochester Americans. Fred Knipscheer had the other goal for Worcester, and Jamie Rivers added two assists. The Amerks game winner came on a controversial five on three power play in the extra session. Worcester head coach Greg Gilbert was given a game misconduct after the goal and was subsequently fined for his actons…in 1999 Jim Campbell scored the go-ahead goal in the second period and Cody Rudkowsky stopped 23 shots as the Worcester IceCats defeated the Cincinnati Mighty Ducks, 4-2. Campbell broke a 2-2 tie with 4:51 to go in the second while Rudkowsky made 15 saves over the final 40 minutes. Jamie Thompson added a goal and an assist for the IceCats…in 2002 the Worcester IceCats skated to a 4-1 victory against the Manchester Monarchs. The teams went scoreless for 28:27 before Steve Halko scored an unassisted goal for the IceCats. Marc Brown found the back of the Manchester net just 1:24 later. Trevor Baker put Worcester ahead 3-0. Mark Rycroft later scored into an empty net with just 11.5 seconds remaining. Baker and Daniel Tkaczuk each registered two points in the game, as both assisted on the final goal. Reinhard Divis turned aside 29 of 30 shots from the Worcester net and was named the game’s number one star…in 2004 the IceCats scored all of their goals in the second period during their 5-2 victory over the Houston Aeros. Worcester got power play goals by Mike Glumac, Blake Evans, and Terry Virtue and even strength markers from Scott Pellerin and Trevor Byrne. Glumac added two assists for a three point game and Virtue and Pellerin both also had helpers. Peter Sejna and Jame Pollock both had two assists each. Curtis Sanford had 36 saves for the win…in 2018 the Railers got a third period goal from Matt Lane just 30 seconds into the period and would go on to beat Fort Wayne 3-2. Nick Saracino scored in the first period and Lane scored a power play goal in the second. Mike Cornell had two assist in the game. Mitch Gillam made 24 saves.

The 210Sports Player of the Game is Barry Almeida.