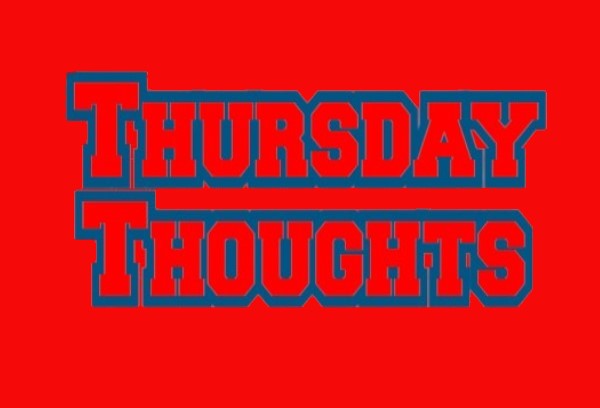 Welcome to another Thursday Thoughts. It’s been an incredibly hectic week, so much so I didn’t have a lot of time to write the top portion of this and I had to postpone recording the Nothing But Shenanigans podcast. Both will hopefully return next week. So we’ll just jump right into things…

Local Collegiate Results
On Friday the Holy Cross Women’s hockey team took on Hockey East rival Boston College but came up just short in 3-2 loss to the #8 ranked Eagles. The one-goal margin is the narrowest in the teams’ seven-game history. Previously, BC had never won a game by less than four against Holy Cross. Three goals are also the least the Crusaders have ever given up to the Eagles. Allison Attea and Millie Sirum scored for the Crusaders, and Jada Brenon stood on her head in goal to almost beat the eighth-ranked Eagles for the first time in program history, making 34 saves. It was a different story on Saturday as the Holy Cross women stumbled early and were never in a 5-1 loss to BC.

Also on Saturday, the Holy Cross Women’s basketball team took on visiting Colgate and got double-digit points from five different players in a 77-48 win. It’s the Crusaders’ third victory in a row. The Men’s team also took on the Raiders, with their game at Cotterell Court on the Colgate campus. It was a far different result, with Holy Cross getting pummeled 95-55.

Sunday saw the Holy Cross Men’s hockey team getting back to action, and the offense showed some rust as the Crusaders lost 1-0 to American International at the MassMutual Center in Springfield, Massachusetts. Erik Gordon was the hard-luck loser for Holy Cross, making 30 saves. In Men’s basketball, the Crusaders once again took on Colgate at the Cotterell Court with the same result, losing 96-87 to the Raiders. The Women extending their winning streak to four games when freshman Bronagh Power-Cassidy hit a free throw with three seconds left in the contest to give Holy Cross a 63-62 victory over Colgate. The victory marked Maureen Magarity’s 150th career win as a head coach.

JIC you wanted to see the first goal of the season from another angle :-))@TomasHertl48 | #SJSharks pic.twitter.com/wikKhehsTJ

Make that ✌️ goals for Hertl in the first period! @TomasHertl48 | #SJSharks pic.twitter.com/ntIUREQInp

GOAL! JAX's Nick Saracino scores on the power play to get the Icemen on the board and make it a 4-1 contest. pic.twitter.com/Sfyd1xdasO

We encourage all teams to leave Couture alone on the power play. @Logancouture | #SJSharks pic.twitter.com/t6klbjjPyJ

Tierney gets his ✌️ of the year! #GoSensGo pic.twitter.com/4RwHz9VdFa

NESN needs a subscription streaming service
If you’re one of the thousands of subscribers to YouTube TV, I don’t really need to say more than just the opening header. If you’re not a subscriber, then perhaps you don’t know that on November 1st YouTube TV stopped carrying NESN in their line-up. A few days ago NESN released a statement that said in part, “There are no ongoing discussions with YouTube TV for carriage at this time. We offered our most favorable rates and terms last September, and received no offer in return.”

Chad Finn of Boston.com wrote an article recently that contains a comment by a YouTube TV spokesperson. “We can promise we’re doing our best to make sure we don’t lose content our members enjoy on YouTube TV. This is something we’re definitely working to avoid with other networks moving forward. In this case, our agreement with NESN expired. Unfortunately, we weren’t able to reach a new one which would allow us to keep offering you these channels. We’re still open to making a deal that benefits all of our subscribers, but don’t have updates to share about that at the moment.”

I’m not going to get into who’s right and wrong in that negotiation. I don’t know the exact cost per subscriber NESN is looking for, nor do I know how much YouTube TV is willing to pay. What I do know is YouTube TV is part of a multi-billion company and NESN is owned by the Red Sox and Bruins. Neither side is hurting enough financially for the amount of money they’re talking about to even be a blip on their radars. So to me, they’re both right and wrong, with Boston sports fans stuck in the middle.

But NESN could easily fix this situation.

When asked by potential customers NESN keeps pointing at the services you can buy that include their network, missing the obvious point that fans have moved away from cable because of the massive amounts companies like Spectrum/Charter and ATT charge and contain many channels people have to pay for that they have no interest in ever viewing. They also point toward fuboTV, a streaming service that doesn’t include Boston’s WCVB-TV (channel 5), which is a non-starter for many people.

What NESN should be doing is opening their streaming service, which already exists for people who subscribe to participating cable systems, to subscribers willing to pay them directly for the service. Again, I don’t know the exact cost per subscriber NESN looks to charge cable and streaming services, but I’ll bet everything I own it’s a lot less than the potential $10 a month they could charge.

Now maybe there’s some legal reason NESN can’t offer a subscription service. When dealing with local televised sports oftentimes some sort of national broadcast agreement comes into play. And if that’s the reason why NESN can’t offer a subscription service then perhaps they should come out and say that. Because as things stand right now from my point of view, YouTube TV obviously doesn’t want NESN and NESN seems fine with ignoring a potentially large amount of revenue from offering their network on a subscription basis.

On top of that, NESN is going to have a huge problem as fans looking for a way to catch the Bruins and Red Sox will eventually find a site streaming the programming for free. Trust me, there are a good number of sites doing that on the internet right now, some safe to use and others not. NESN should just turn their backs on YouTube TV and the other streaming services and embrace the people who are willing to pay for their programming by opening up their stream for subscriptions.

Because if they don’t, eventually people will find those pirated streams and get used to paying nothing for it, and those will be customers gone forever.

Stuff you may have missed from 210Sports this week
2020 NFL Conference Championships Schedule, TV, Announcers