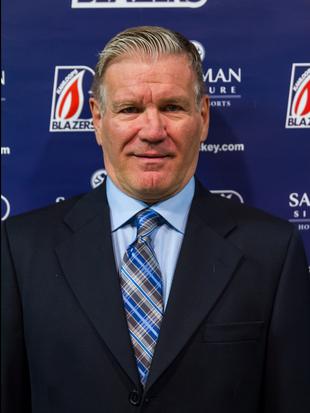 This morning it was officially announced that Terry Bangen has been named the Assistant Coach of the Worcester Railers. Bangen is a longtime coach in the Western Hockey League, having two stints with the Kamloops Blazers sandwiched around many years with the Tri-City Americans. He also served as Assistant GM and Special Advisor with Tri-City.

Now I could just reword the press release or mention other career highlights–like he was an assistant coach for the Vancouver Canucks for two seasons–but that’s not what I do here. Here on 210Sports I like to look for a Worcester connection, and it didn’t take too long to find one.

Over his long career in Canadian Junior hockey Bangen coached several players who would eventually play in the AHL for Worcester.

Five of those players were members of the Worcester IceCats. Jarrett Deuling, Cal McGowan, Tyson Nash, and Jason Strudwick all suited up for the Kamloops Blazers before arriving in Worcester. Blake Evans played for the Tri-City Americans before becoming an IceCats forward.

There’s one Worcester Sharks player who played for Bangen as Scott Ferguson played for the Blazers many years prior to his stint with the WorSharks.

Looking at the names of players who Bangen coached you could put together a pretty competitive team when those players were in their primes. Here’s to hoping Bangen can add a lot more names to that already impressive list.

(For those that care to, you can read the RailersHC press release right here)