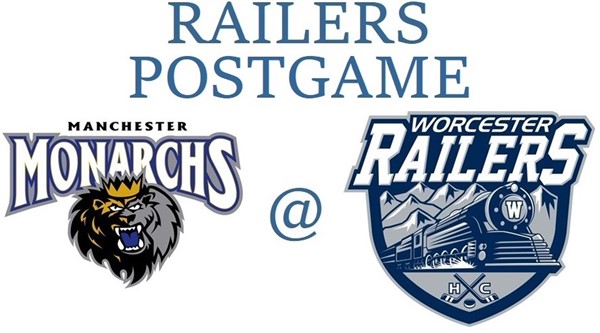 The Worcester Railers entered Wednesday night’s contest at the DCU Center against the Manchester Monarchs knowing that to have any measurable chance to make the ECHL North Division playoffs they needed to win, and preferably in regulation. Because of that, and as a team that surrendered 14 goals over the last two games, it was imperative that the Railers get off to a fast start.

Worcester found themselves down a goal just 4:18 into the contest when Matty Gaudreau attempted a long pass out of the Railers zone. The puck hit Worcester defenseman Rob Powers in the back and bounced right to Monarchs forward Bokondji Imama. He was so alone with the puck that Imama tripped entering the Railers zone but was still able to get to his feet and make a pass over to Tony Cameranesi before a defender could get even close to him. Cameranesi then flipped the puck over Worcester goaltender Mitch Gillam.

Tyler Mueller would tie the game at 10:51 with a one-time blast from the right circle. The play began with Ryan Hitchcock breaking in alone on Manchester netminder Charles Williams, who made a stick save. Hitchcock never gave up on the puck, chasing it down in the left wing corner. He gathered the puck and worked his way toward the blueline, and found Mueller streaking into the zone on the right side off a line change. Barry Almeida picked up the secondary assist on the goal

The Monarchs retook the lead at 18:25 of the second period on a play that probably shouldn’t have happened at all. Tim Shoup gets credited with the goal, but his shot wasn’t going in until Gillam accidentally deflected it into his own net. Shoup’s shot was going high and wide, and as he’s done for nearly two full seasons Gillam went to use the blocker to knock it into the corner to prevent it rebounding off the glass back in front. Only this time he goofed and it deflected in instead.

Fans were a beyond a little surprised when Blake Wojtala took to the net to start the third period. Twenty-eight seconds later it was a 3-1 deficit when Sam Kurker found Pavel Jenys all alone at the far post. Wojtala couldn’t get over in time and Jenys had essentially all net to shoot at.

Nick Sorkin got his team within one on a nice goal at 5:04. Mueler got the puck up from the Worcester zone to Sorkin, who skated it to the blue line and fired a cross ice pass to Almeida on the right side. Almeida fumbled with the puck a bit but was still able to get it back to Sorkin, who had moved to the slot. Sorkin flipped a high backhander over Williams to make it 3-2.

The Railers would tie it on an extra attacker goal with referee Matt Menniti holding his arm up to call a delayed penalty at 16:15. Worcester had a couple nice bids with the extra man, but the goal came when Powers blasted the puck from the left wing point. It could be heard hitting a couple things on its way through the crowd of players and suddenly the red light went on. Currently Powers is listed as the goal scorer, with assists going to Dylan Willick and Mueller. That could change.

Into overtime the teams would go, and while Worcester had its chances the Monarchs had the best one when Daniil Miromanov used the open ice to create a breakaway for himself and he beat Wojtala to send the Railers playoff chances down to almost zero.

With two assists last night Barry Almeida now has 69 for the Railers, jumping him over Bob Lachance and Marty Reasoner for 19th all-time in Worcester pro hockey history. Those two points give Almeida 113, and he passes Riley Armstrong (112) and ties Chris Kenedy for 18th.

Worcester has a long history of coaching brain cramps, and in the WorSharks era Roy Sommer made it an art form with some of his mistakes. But Railers head coach Jamie Russell may have taken it all to the next level by replacing Mitch Gillam with rookie Black Wojtala. As written by Bill Doyle, Russell replaced his number one goaltender because of his goof on Manchester’s second goal, a play that Gillam has been making since he got here. We’ll never know if Worcester would have won had Gillam stayed in goal, but he absolutely was their best chance.

It’s the first game of the week so we’ll take a look at the voting for last week’s Railers Player of the Week over in the Railers fans Facebook group, and last week’s winner is Drew Callin. Ross Olsson and Ivan Chukarov were the other two nominees.

On this day, April 4th, in Worcester hockey history: in 1998 Jason Zent has a goal and two assists while Jamal Mayers and Stephane Roy had a goal and an assist in the IceCats 5-2 win over Springfield. Bob Lachance and Robert Petrovicky each had a goal, and Libor Zabransky added two assists. Frederic Cassivi had 31 saves in the win…in 2004 the IceCats scored six second period goals en route to an 8-2 routing of the Lowell Lock Monsters. Johnny Pohl had two goals in that frame, with Ryan Ready, Marc Brown, Mike Glumac, and Blake Evans each having one. Jeff Panzer and Aris Brimanis had the other goals for Worcester. Jon Coleman and Peter Sejna each had three assists, while Ready and Scott Pellerin both had two. Curtis Sanford made 32 saves…in 2008 Graham Mink scored a third period game tying goal and Mike Iggulden had an unassisted game winner at 1:06 of overtime to give the WorSharks a 2-1 win against Portland. Thomas Greiss made 24 saves…in 2009 Ryan Vesce, Dan DaSilva, and Kyle McLaren all scored in the WorSharks 3-2 win in Manchester. Tom Cavanagh had two assists in the game, and Thomas Greiss made 34 saves including one on a Matt Moulson penalty shot with six seconds left in regulation…in 2012 the WorSharks got a third period game winner from John McCarthy to defeat the Albany Devils 2-1. Tony Lucia gave Worcester the early lead, and Harri Sateri made 31 stops in the contest…in 2018 Barry Almeida scored at 1:30 of overtime to give the Railers a 2-1 win at Reading. Matt Gaudreau had Worcester’s first goal, and Mitch Gillam made 30 saves.

The 210Sports Player of the Game is Barry Almeida.