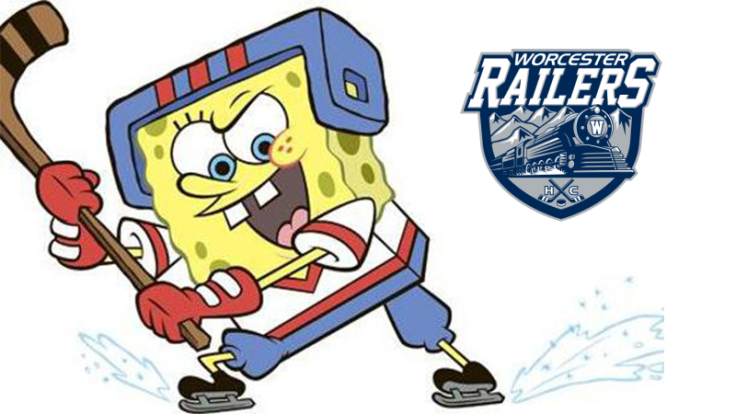 The Worcester Railers were looking to carry the momentum of Friday night’s big win over the Newfoundland Growlers into Saturday night’s contest against the Indy Fuel, but playing their fourth game in five nights finally took its toll as the Railers looked like a tired team in a 4-2 loss.

All season long turnovers by Worcester have been a huge problem, and one by David Quenneville ended up in the back of the Railers net at 8:40 of the opening period. Dylan McLaughlin stole the puck right off the stick of Quenneville as the defenseman attempted to break out of the Worcester zone. After a couple passes the puck landed on the stick of Mathew Thompson, who beat Railers netminder Evan Buitenhuis for the 1-0 lead.

Indy’s second goal was one that would have buried Worcester prior to Dave Cunniff taking over the reins. With the Railers on the power play the puck deflected high into the Worcester zone. With Buitenhuis racing from his net and Bobby MacIntyre charging from the Fuel zone it was Buitenhuis that got to the puck first…only to whiff on his backhand clearing bid. MacIntyre calmly skated around Buitenhuis to the loose puck and buried it into the yawning net for the 2-0 lead at 19:56.

But the Railers, despite looking sluggish, never stopped trying to force the issue and got within one on a second period penalty shot goal by Jordan Samuels-Thomas. On the original play Samuels-Thomas was hauled down from behind by Jake Ryczek. After a delay to fix one of the net pegs Samuels-Thomas went in on former Manchester Monarchs and current Fuel goaltender Charles William, and Samuels-Thomas made an NHL-quality move to have Williams commit to the low stick side before Samuels-Thomas fired it high over the netminder’s shoulder an in at 6:39.

McLaughlin gave Indy its two goal lead back at 16:19 when he recovered a rebound of Mathew Thompson’s shot and tried to bank it off the down and out Buitenhuis from a tough angle. The puck ended up on top of Buitenhuis’ legs but the goaltender didn’t know it. When he moved to get up the puck rolled right back to McLaughlin, who fired it into the net.

Once again Worcester would get within one, this time on a Bo Brauer goal at 18:04. The Railers won a draw to the right of Williams, but Brauer’s bid went wide. Indy defender Tim Shoup attempted to clear the puck on the left side, but Ross Olsson got a piece of it and it went right to Brauer. His laser to the glove side didn’t miss and it was 3-2.

It was another former Monarch, Michael Doherty, that put the game out of reach for Worcester when defenseman Craig Wyszomirski fired the puck wide of goal and right to the tape of Doherty’s stick behind Buitenhuis at 11:04 of the third.

Worcester now begins a Canada swing, flying to Brampton on Tuesday for a Wednesday morning game against the Beast. That afternoon they’ll fly to The Rock for a Friday/Saturday series against the Newfoundland Growlers.

GAME NOTES
Scratches for the Railers were Barry Almeida (14-day IR/lower), Drew Callin, Ivan Chukarov (day to day), Anthony Florentino (14 day IR/undisclosed), Kyle McKenzie, Tanner Pond (14-day IR/upper), Dante Salituro, and Shane Walsh (14 day IR/upper). Tommy Nixon was the emergency back-up goaltender. According to the Railers Chukarov “isn’t 100%”, but if the team had been to the point where they absolutely needed him to play he could have.

Prior to the start of warm-ups the Railers said that Salituro, who had a hat trick on Friday night, was a scratch due to a scheduled night off. Since Bill Ballou spilled the beans in his Telegram article we’ll now mention that part of the trade with Indy for Salituro included an agreement that he not play against them in this game. Since having him on the roster is better than not, that’s an easy agreement to make.

As you can tell by the post’s graphic, the Railers wore Nickelodeon’s SpongeBob SquarePants jerseys for the game. Unlike last season’s Teenage Mutant Ninja Turtles, which were so ugly that they’re used to induce vomiting by the American Association of Poison Control Centers, the SpongeBob ones weren’t that bad. They were auctioned off during the game to benefit the Railers Foundation. Many times with specialty jerseys there are some number changes for the newly signed players, but the only one Saturday was for EBUG Nixon, who wore Linus Soderstrom’s #31 instead of the #39 he wore Friday. The box score does not reflect that number change.

This being the one time Worcester plays Indy in the regular season we’ll take a look at some local connections for the Fuel, starting with defenseman Josh McArdle. The defenseman, who was a scratch Saturday, played ten games with the Railers in 2017-18 after his college season was over. Forward Liam Coughlin is a South Boston native. Along with head coach Doug Christiansen, goaltender Charles Williams, defensemen Tim Shoup and Craig Wyszomirski, and forwards Michael Doherty, Sam Kurker, Joe Sullivan, and Spencer Watson are all former Manchester Monarchs.

The 210Sports Person of the Game was national anthem singer Trish Hunt.