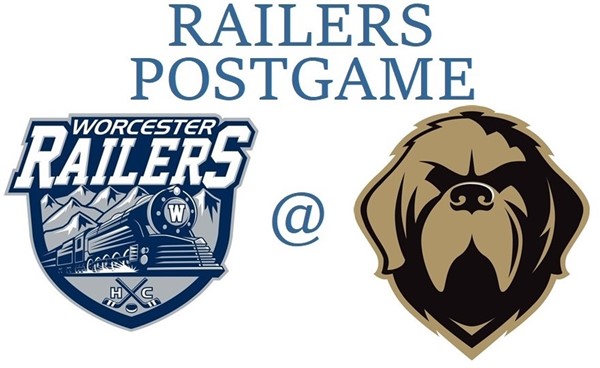 Tuesday night the Worcester Railers played their first of two games this week in St. John’s, Newfoundland against the Growlers at the Mile One Centre looking to break out of scoring slump and end a three game losing streak.

When a team is having issues putting the puck in the net the last thing they want to do is give up the first goal of the game, but unfortunately for Worcester that’s exactly what they did when Derian Plouffe fired a shot on Railers goaltender on Mitch Gillam. He made the save, but the rebound caromed off a Worcester player and into the net at 11:37. Scott Pooley and Ryan Moore had the assists.

The Railers got the equalizer at 14:29 when Woody Hudson sent Josh Holmstrom in on net all alone with a pass from the left wing halfboards to the slot. Holmstrom’s first bid was blocked by Newfoundland netminder Michael Garteig, but Holmstrom followed up his shot and flipped the rebound in. Nick Bligh had the secondary assist for his feed into the Growler zone.

After a scoreless second period whichever team lit the lamp first in the third period would have the advantage, and it wasn’t good for Worcester when Josh Kestner shuffled the puck between Gillam and the far post at 3:58 to give Newfoundland their second lead of the game. Giorgio Estephan had the only assist on the play.

It got worse for the Railers when Bryan Arneson was sent off for an ill-timed cross-checking minor, and once again it was Kestner getting the goal when he tipped Brady Ferguson’s shot past Gillam. Stefan LeBlanc had the secondary assist.

Worcester had a late power play but couldn’t get any sort of offense going, and when the final horn sounded the Railers losing streak hit four games. The two teams will play again tomorrow, with a 5:30pm EST start.

After Saturday’s loss to Newfoundland The Railers released EBUG Ryan Hubbard as Mitch Gillam was reassigned to Worcester by the Bridgeport Sound Tigers. They needed a little luck to get Gillam back as on Sunday Sound Tigers goaltender Christopher Gibson was given a ten-minute misconduct for knocking the puck out of play after a late Wilkes-Barre/Scranton Penguins goal. It was the same for of play that Railers defenseman Kyle McKenzie was suspended for, but it appears Gibson has avoided any supplemental discipline.

With this being the first game of the new week we’ll take a look at the fan voting for Railers Player of the Week for last week. The voting, which takes place on the Facebook page of the Railers Fan Club, and the runaway winner was, as it should have been, Evan Buitenhuis. The rookie netminder was solid in net while getting virtually no help at all out there. Ivan Kosorenkov and Tyler Barnes were the other two nominees.

The Railers left Worcester on Monday morning, having had to meet at the rink at 2:45 EST for the departure. They flew from Logan in Boston to Toronto, and then on to St. John’s, Newfoundland where then landed at 2:30EST on The Rock. I was asked if it was possible for the Railers to bus to Newfoundland. It’s a 30ish hour trip (not counting breaks), involves a ferry ride, and covers almost 1,500 miles. So, yeah, they could…

And just for comparison, while the Railers play in Newfoundland the Worcester Blades, the city’s entry in the Canadian Women’s Hockey League, were playing just a bit further away in Shenzhen, Guangdong, China. I don’t know how long it takes to get there, but I do know you can’t take a bus.

The 210Sports player of the game was Josh Holmstrom.