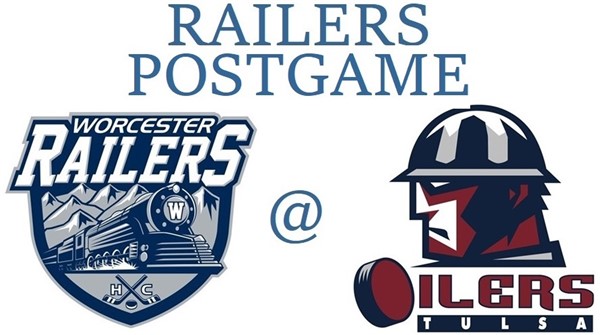 The Worcester Railers took on the Tulsa Oilers Saturday night in the first of two games this weekend at the ROK Center between the clubs with Worcester looking to continue the momentum of their five goal third period Friday night in Allen.

The Railers got off to the start they were looking for at 5:59 of the opening period when Tyler Barnes fired a shot on Oilers goaltender Ian Keserich that Keserich made the save on. The rebound came right back to Barnes, who backhanded it past Keserich and in for his eleventh goal and 16th point in his last twelve games. Ryan Hitchcock and forward turned defenseman Bo Brauer had the assists.

And from that point on it would all be Evan Buitenhuis.

The Worcester rookie netminder was fantastic, finishing the game with 47 saves for his first professional shutout. But it wasn’t like most of those saves were easy. Tulsa entered the leading the ECHL averaging over 35 shots a game, and at least on Saturday night many were high quality scoring chances.

What might have been Buitenhuis’ best save of the game came late in the second period when he stoned Jared Thomas on a breakaway. Thomas is no slouch, entering the night with 16 goals and 41 points in 35 games. But Buitenhuis made the save to preserve the shutout.

In the waning moments of that middle stanza Buitenhuis did get a touch of extra help from his defense as after a scramble in the front of the Worcester net the puck slowly started to head toward the goal line with the netminder down and out. Ryan MacKinnon took care of it, sweeping the puck into the far corner.

While the ice was tilted toward the Railers end most of the game in the third period it was as if they’d built a rink on Worcester’s George Street as the Oilers kept the pressure on for almost the entire 20 minutes, officially outshooting the Railers 15-4 in the frame but having significantly more shot attempts than that.

But like the rest of the game, Buitenhuis was up to the challenge.

According to Bill Ballou, who recently returned to the Worcester Telegram after a brief “retirement” and is on the road trip with the Railers, “Buitenhuis’ 47 saves ties the Worcester pro record for most saves in a shutout. Al Stalock also had 47 in beating Springfield, 1-0, on October 24, 2009”. That would obviously make it a Railers franchise record too.

It was the second 1-0 shutout win in franchise history, with the first being Wednesday, December 20, 2017 against the Reading Royals. Mitch Gillam had 26 saves that night at the DCU Center, with the lone goal coming from Barry Almeida at 19:36 of the first period.

It will be the Railers and Tulsa again Sunday afternoon, with puck drop coming at 5pm EST.

GAME NOTES
Scratches for the Railers were Connor Doherty (week to week/facial injury), Tommy Kelley, Kyle McKenzie (Out for season/shoulder), Tommy Panico (Out for season/hand), David Quenneville (ill), and Matt Schmalz (14-day IR/upper). Mitch Gillam was the back-up netminder for the second game in a row. It’s the first time since April 7th and 8th last season that Gillam was the back-up in consecutive nights. Those two games it was Will King finishing out the season in goal for Worcester. Once again forward Bo Brauer played on the blueline, and Malcolm Gould made his season debut for the Railers.

With the whitewash by Evan Buitenhuis he joins Gillam as the only two Railers goaltenders with shutouts. Gillam has five to his credit, all last season. Playoff stats are considered separately, so Gillam’s playoff shutout last season doesn’t count in those totals.

Tulsa was forced to use EBUG Ian Keserich in goal Saturday night as during Friday night’s game starter Devin Williams was injured in the middle of the second period. Evan Fitzpatrick, the usual top goaltender for Tulsa, was reassigned by the St Louis Blues to the San Antonio Rampage on February 4th. The Oilers back-up was Kurt Peterson, and as hard as this writer looked I couldn’t find any stats that I was confident were his.

The Oilers wore a “Pink in the Rink” jersey that made it virtually impossible for Railers broadcaster Eric Lindquist to correctly identify any of the Tulsa players. The video wasn’t all that much better. As they did Friday in Allen Worcester wore their home white jerseys.

Just like Friday night against Allen Saturday night was the first game between Worcester and Tulsa this season, so we’ll look for any connections between the teams and Massachusetts hockey. Forward Peter Sivak played nine games for the Worcester Sharks in 2012-13, going 4-1-5 in nine games. He’s currently in injured reserve for the Oilers. For the defenseman Chris Forney played four years at UMass-Lowell and Adam Phillips went to UMass-Amherst. Forward Scott Cuthrell, who is on a call-up contract from the SPHL’s Knoxville Ice Bears, played four years for Division III Nichols College.

On this day, February 17th, in Worcester hockey history…in 2007 Grant Stevenson had a first period goal and Steve Bernier had the game winner in the second period in the Worcester Sharks 2-1 win over Springfield. Thomas Greiss made 20 saves for the win…in 2018 T.J. Syner had the Railers only goal in a 2-1 shootout loss to Orlando. Tommy Kelley and Matt Lane had the assists, while Kelley notched the only shootout goal for Worcester.

We don’t usually make the 210Sports Player of the Game one of the top-two stars, but how can we not make it Evan Buitenhuis for his 47 save shutout?.