The Worcester Railers faced off against the Maine Mariners at the DCU Center for the second time in 24 hours Saturday night looking to avenge their 4-2 loss from Friday, and while they didn’t play perfect hockey Worcester was able to earn a split of the two game series with a 3-2 win.

It was Teddy Bear Toss Night and the Railers faithful were hoping for an early chance to launch their stuffed animals on to the ice, and Shane Walsh sent those bears flying through the air when he scored at 2:13 of the first period. The play began with Justin Murray feeding Walsh in the slot, but Wash’s bid was blocked wide. Jordan Samuels-Thomas gathered the puck in the left wing corner and wheeled the net, throwing a centering feed to Walsh still in the slot. His shot went through traffic and beat Maine netminder Tom McCollum stick side.

Ross Olsson continued to make a case that he belongs in the line-up every night when he scored his fourth goal of the season on a play that was mostly due to his hard work. Bo Brauer dumped the puck into the left wing corner, and Olsson battled Mariners defender John Furgele to gain possession and forced Furgele to just push the puck towards the back of the Maine net. Walsh was there to fight for the puck and got it back towards Olsson at the near post. Olsson’s backhander snuck inside the far post and in at 5:33 to make it 2-0.

Maine controlled much of the middle period but Worcester goaltender Evan Buitenhuis was outstanding in the frame. Walsh would then go on to make it a 3-0 lead at 6:50 of the third when he, Brauer, and Yanick Turcotte broke into the zone on a three on two rush. Brauer’s shot was blocked but went right to Walsh on the right side, and Walsh flipped it into the yawning net.

Nothing has come easy for the Railers this season, and Maine was able to grab two third period goals to cut the lead to 3-2. The first came at 8:43 when Alex Kile banged home a rebound after Terrence Wallin’s shot hit Buitenhuis in the mask. Zach Tolkinen made it a one goal game at 12:18 with an NHL-quality wrist shot over the right shoulder of Buitenhuis and just inside the far corner.

The Mariners pulled McCollum for an extra attacker but it was the Railers that controlled the puck for most of that stretch, sending several attempts on the open net just wide. Kyle McKenzie’s heads-up play with five seconds remaining to simply push the puck out of the Worcester zone to keep the clock running sealed the deal for the Railers.

Worcester finishes their three in three home weekend Sunday with a 3pm tilt against the Reading Royals.

For some odd reason pro hockey seems to avoid “color vs color” match-ups where neither team is wearing white jerseys. Last night’s tilt proved that two teams can wear dark jerseys and not have an issue telling friend from foe as long as each team is wearing different color helmets. The Joker-clad Mariners had white helmets, the Batman wearing Railers had black. This writer will mention it looked odd on the video, but live on the ice was a whole different story.

With Worcester in the specialty jerseys there was one number switch, with back-up goaltender Milsoz wearing #31 instead of his usual #39. The box score does not show the change.

In a story that was teased on Twitter, let me first begin by saying fans know exactly how poorly the Railers season has gone so far. Apparently, my phone knows as well. As I attempted to tweet “Walsh!!! @RailersHC lead 3-0” my phone determined that the word “lead” was spelled incorrectly. I tapped the screen to see what it thought the correct spelling was, and my phone trolled me by showing it should have been spelled “trail”. And that is why I don’t use auto-correct.

Since we’re discussing Twitter, Worcester Telegram correspondent Bill Ballou may have had the best one all night when he tweeted “Justin Murray just created a fan club”, because Murray absolutely did when he stuck up for teammate JD Dudek and took on former Holy Cross star and now Mariners phony tough man Ryan Ferrill at center ice. Murray ended up getting a game misconduct in the battle because his jersey wasn’t tied down.

One more quick note on the Teddy Bear Toss, several Railers players helped the ice crew gather the stuffed animals into piles to be taken off the ice. While this was going on goaltender Evan Buitenhuis scooped up a huge stuffed unicorn and briefly skated around with it in his arms. I called out on Twitter hoping someone had a picture of it, and Worcester Railers Booster Club Social Media Coordinator Jess Curtin answered the call. 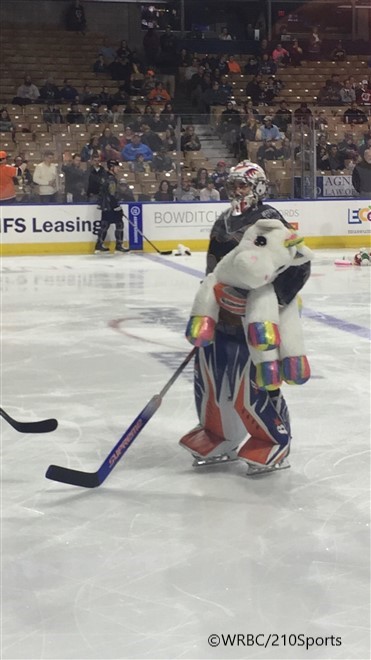