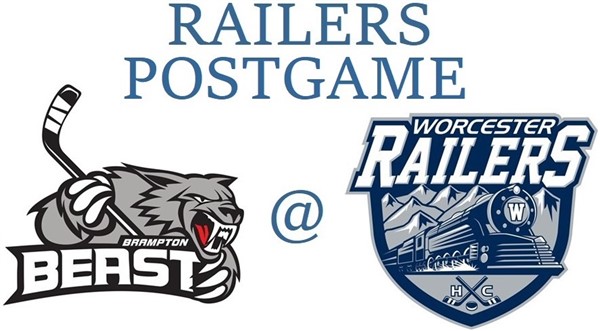 The Worcester Railers took on the Brampton Beast at the DCU Center Wednesday evening in the first of a pair of contests between the two teams this week with the Railers looking for their first four game winning streak of the season.

Things didn’t get off on the right foot for Worcester when David Pacan found Brandon Marino all alone in front of Railers goaltender Evan Buitenhuis. Marino froze the rookie netminder with a nice head and shoulders fake, and then fired a shot to the glove side that Buitenhuis couldn’t get to at 6:27 of the opening period. David Vallorani had the other assist on the play.

Worcester got the equalizer at 9:29 when Tyler Barnes picked up a loose puck in the left wing circle and stick handled through several Beast players before firing a low shot that beat Brampton goaltender Michael McNiven through the five-hole. Barry Almeida and Ryan Hitchcock had the assist on the play that all developed after a face-off win by Hitchcock.

The Railers would light the lamp two more times but both were correctly waved off by referee Steven Rouillard. The first was at the midpoint of the first when it appeared that Hitchcock kicked the puck into the Beast net. Rouillard conferred with his linesmen, ruled it “no goal”, and then went to video when he confirmed his call.

The second came early in the third period when Worcester was swarming the Brampton net. Josh Holmstrom tried to bat the puck out of the air to his stick on the ice, but the puck ended up going into the net. It took virtually no time for that review to confirm it wasn’t a goal.

At 13:39 of the final stanza Brampton retook the lead when Anthony Beauregard gathered a rebound of Aaron Luchuk’s shot and tucked it past Buitenhuis to make it 2-1 Beast.

After both Hitchcock and Ryan MacKinnon blocked shots that were headed into the empty Worcester net the Railers found themselves on the power play, and with time running down in regulation it was Barnes that got the crowd to its feet with the game tying goal.

With Worcester scrambling to get back to even Barnes was knocked down in front of the net. The puck ended up in the right wing corner, where Hitchcock was able to grab it and fire the puck into the slot right to Barnes, who had just gotten up. Barnes wasted no time blasting it past McNiven with five seconds remaining in regulation. Almeida had the secondary assist on the play.

On to overtime the teams went, and after the Railers had a couple nice bids Erik Bradford scored the game winner for Brampton when his wraparound attempt hit the stick of a Railers defenseman and snuck inside the far post for the 3-2 Beast win.

GAME NOTES
Scratches for the Railers were Nick Bligh, Malcolm Gould (14-day IR/upper), Tommy Kelley (14-day IR/upper), Woody Hudson, Kyle McKenzie (14-day IR/upper), and Tommy Panico. Mitch Gillam was recalled to the Sound Tigers Wednesday morning so the Railers brought in Ryan Hubbard, who was the back-up goaltender. On Tuesday Ivan Kosorenkov was reassigned to the Railers by the San Jose Barracuda. Kosorenkov played one game during his recall, but more importantly had his immigration status cleared up with a visit to the Russian Consulate in Los Angeles, so he should now be able to go to Canada to play for Worcester.

With this being the first game of the week we’ll take a look at the “Railers Player of the Week” balloting that takes place in the Railers Fan Facebook Group, and this week’s winner was Tyler Barnes with more than half the votes cast. Barnes had a goal and three assists and was +4 last week. Dylan Willick and Matty Gaudreau were the other two nominees.

For some official awards, Mitch Gillam was named the “CCMHockey ECHL Goaltender of the Week” for last week. According to the press release, Gillam went 3-0-0 with a 1.64 goals-against average and a save percentage of .951 in three appearances last week. He made 37 saves in a 2-1 win at Brampton on Tuesday, stopped 30 shots in a 4-2 victory at Maine on Friday and had 31 saves in a 3-2 win over the Mariners on Sunday. It’s the second time he’s won the award in his career.

For those that missed it, this writer was the first intermission guest on the Railers radio broadcast. Tom Matthews does the interviews in that segment, and did a masterful job of making me sound like I knew what I was talking about. My only goal was to avoid cursing on air, and I managed to clear that low set bar.

The 210Sports Player of the Game was Ryan Hitchcock.