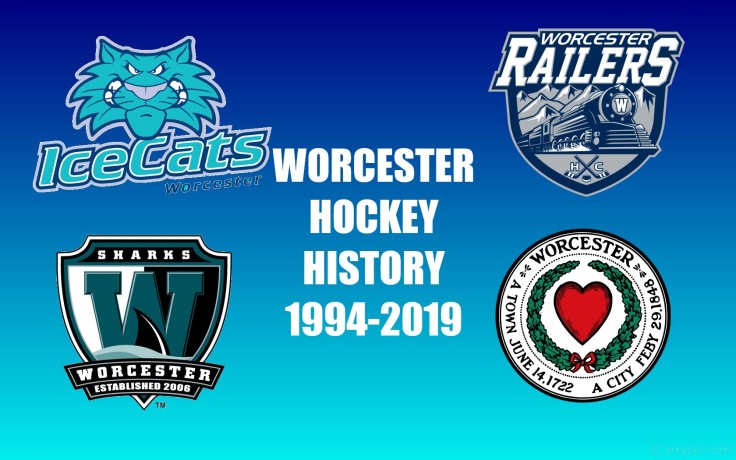 1994 vs Springfield 5-5 tie
The IceCats played their first game ever in the city of Worcester, and thanks to a late extra attacker goal skated away with a 5-5 tie with the Falcons. Shawn Heaphy scored the first home goal in IceCats history at 9:42, assisted by Roy Mitchell and Walt Poddubny. Heaphy would also have the second home franchise goal at 10:03 with an unassisted tally. Mark Deazeley scored at 13:21 for the Falcons in their first road goal in their franchise history. Ravil Gusmanov then tied the game at 1:32 of the second period. Yves Heroux gave Worcester the lead back at 11:11, with assists going to Mitchell and Jason Widmer. In the third Springfield got goals from Jason McBain (1:58) and Dale Junkin (7:23) to take the lead, but Widmer would come back to tie it at 15:30, with Brian Straub picking up the helper. McBain scored again at 17:49 to put the IceCats down again, but Poddubny would score on the power play with the goaltender pulled at 19:37 for the 5-5 tie. Widmer and Heaphy assisted on the tying goal. Wayne Cowley made 25 saves in the game.

1996 7-4 exhibition loss vs Providence (New England Sports Center, Marlborough, MA)
For the IceCats, Mark Ouimet had a goal and two assists. Mike Maneluk had a pair of goals, and rookie Jamal Mayers chipped in a goal and an assist. The first shot of the game went through the catching glove of Travis Scott and in, and it didn’t get much better for the ‘Cats after that. Jay Moser had two goals for the P-Bruins. Brett Harkins, Scott Kirton, Kirk Nielson, Andre Roy, and Vevgeny Shaldybin also scored for Providence.

1998 4-3 OTL exhibition loss at Adirondack (Glens Falls Civic Center, Glens Falls, NY)
The Worcester IceCats came back twice to tie the game, but could never grab the lead in a 4-3 overtime loss to the Red Wings. Jeff Lazaro and ex-‘Cats forward Ivan Ciernik gave Adirondack a 2-0 lead. Dean Stock converted at 2:24 of the second period for the IceCats and Shane Toporowski tied it 2-2 with a power-play goal at 11:30. After a Red Wings goal Jeremiah McCarthy tied it again at 16:49 of the middle period. There was no scoring in the third, and Phil Audet won it for Adirondack at 4:02 of the extra session. Dan Murphy had 20 saves for Worcester.

2008 3-2 exhibition loss at Hartford (Trinity College, Hartford, CT)
(WOLF PACK) Matt Zaba stopped 24 out of 26 shots Wednesday night, to backstop the Hartford Wolf Pack to a 3-2 American Hockey League preseason victory at the Koeppel Community Sports Center at Hartford’s Trinity College. It was the preseason opener for both teams. Hartford got goals from Sergei Demagin, Tom Pyatt and Jordan Owens, while Rory Rawlyk and Ashton Rome tallied for Worcester. After a scoreless first period, in which Hartford outshot Worcester 8-7, the Wolf Pack scored the game’s first two goals only 1:23 apart in the second period. Demagin, gave the Wolf Pack a 1-0 lead 8:07, deflecting a shot by Chris Murray past Shark starting goaltender Derek MacIntyre. Second-year pro Tom Pyatt then stole the puck deep in Worcester’s end and beat MacIntyre with a short-range shot for a 2-0 Hartford advantage at 9:30. Rawlyk, a former Wolf Pack defenseman, got Worcester on the scoreboard at 14:39 of the second frame, before Owens scored what turned out to be the game-winner at 12:07 of the third period, poking a loose puck behind Ryan Daniels, who had replaced MacIntyre after Pyatt’s second-period goal. Rome cut Hartford’s lead back to one goal with a shot from the left-wing circle with 3:30 remaining in the third, but Zaba held the Sharks at bay thereafter. Neither team managed a power-play goal in the game, despite a total of 16 power-plays being awarded by referee Jamie Koharski. Worcester was 0/9 and Hartford went 0/7. In the Worcester net, MacIntyre allowed two goals on 15 shots in 29:30 of play and Daniels stopped 16 of the 17 shots he faced in 30:20 of work.

2010 2-1 exhibition win at Springfield
(WORSHARKS) The Worcester Sharks defeated the Springfield Falcons 2-1 in preseason action at the MassMutual Center in Springfield, MA on Friday night. Alex Stalock was perfect in 40 minutes of action making 21 saves and Worcester received goals from Steven Zalewski and Garet Hunt in a feisty exhibition game that feature four fights. Stalock was sharp in net early for Worcester making 10 saves in a scoreless first period. Garet Hunt (WOR) and Kyle Neuber (SPR) dropped the gloves early in the first period in an entertaining bout. With 1:29 remaining in the opening period, Matt Irwin (WOR) tangled with Kevin Harvey(SPR) after Harvey hit Ryan Constant (WOR) from behind. Harvey received two majors and a game misconduct as a result, but the Sharks could not convert on the man advantage to end the period. Springfield outshot Worcester 10-8 through 20 minutes. Dan Taylor made several nice stops in the crease to open the second period for the Falcons as Worcester could not score on the major power play. The Sharks would draw first blood on a 5-on-3 power play at 6:40 as Steven Zalewski (1st) deflected a blast from the point by Nick Petrecki past Taylor to give the Sharks a 1-0 lead. Garet Hunt (1st) gave the Sharks a 2-0 lead after he finished a nice rush down the left wing side with a wrist shot from the left circle at 12:49. After a terrific split save by Stalock, tempers flared at 16:55 after a goal mouth scrum in the crease of Stalock which resulted in Ryan Constant (WOR), Cory Quirk (WOR), Cory McGillis (SPR), and Kyle Nueber (SPR) each receiving major penalties for fighting. Worcester led 2-0 after forty minutes. Both teams would change out goalies to start the third period (Carter Hutton for WOR and Riley Gill for SPR) and the Falcons would get on the board at 5:21. Cory McGillis (1st) found the back of the net with a hard slap shot from the left circle on a 3-on-2 rush to cut the Sharks lead to 2-1. Carter Hutton stood tall the rest of the way as Worcester held on for a 2-1 victory. Worcester’s record improves to 1-1-0-0 in preseason action.